While back home recently, I took in a Tigers’ game with my brother.  We could not have asked for better Michigan weather, and went downtown early to walk around and enjoy a few Lafayette Coney Island hot dogs before the game.

The downtown area of the city is truly experiencing a re-birth.  Office buildings, many having stood abandoned, and with their stone facades masked by grime and black soot for decades are, thanks to the Illitch family, Dan Gilbert and others, coming back to life.  The David Whitney Building now fairly sparkles in the sunlight, while the nearby Book Tower is currently undergoing a bath and renovation.  And, after a major renovation, the downtown fire station recently opened as a boutique hotel, though retaining many of the features of the venerable old fire house.

After the game we took our time walking back to the car, allowing folks leaving Comerica Park, as well as the fans arriving for the Lions’ game at Ford Field to clear the roads.  We stopped at a nearby park, where a band was setting up for a free concert.  When we sat down my brother asked if I recognized the building across the street from us.  I did not, though I certainly should have.  We were looking at the old Grand Army of the Republic Memorial Hall at Grand River and Cass Avenue. 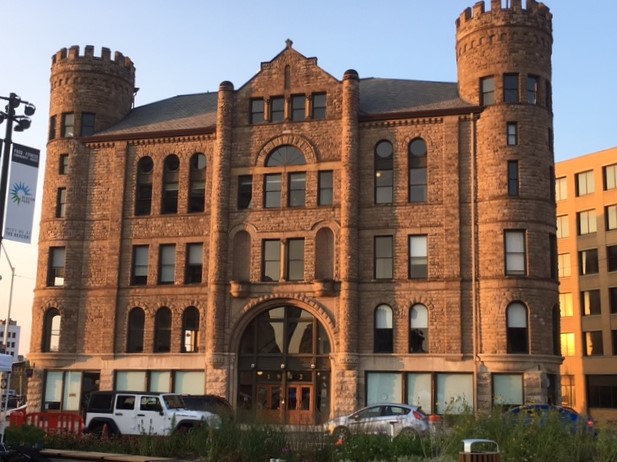 When he helped to dedicate the building in January 1901, Mayor William Maybury reminded the veterans who packed the hall to remember “the unwritten history that transpires at the camp fires and bivouacs, held by the posts, and urged upon the old soldiers the necessity of preserving the papers and letters…and the personal experiences they relate for posterity, in order that the real history of the Civil War may be written.”

Mayor Maybury appreciated history, especially Detroit’s history and the city’s place in history.  He presided over Detroit’s Bi-Centennial in July 1901 and in preparation for the celebration he asked residents to write letters, to be locked into a time-capsule “for those whose good fortune it will be to live in Detroit at the opening of the 21st Century.”  During the celebration, which lasted several days, Maybury consigned sixty-four letters to a copper box which he then locked in a vault at the city hall.  In his own letter, the mayor pondered the technological advances of the next hundred years.  “We communicate by telegraph and telephone over distances that at the opening of the nineteenth century were insurmountable.  We travel at a rate not dreamed of then…by railroad and steam power from Detroit to Chicago in less than eight hours.  How much faster are you traveling?  How much farther have you annihilated time and space, what agencies are you employing to which we are strangers?”  If only he knew.

About one-hundred and fifty veterans of the Civil War marched in one of several parades during the multi-day celebration.  One of the dignitaries for the celebration was Michigan’s governor, Aaron Bliss, who had served in the 10th New York Cavalry during the war.

As the last veterans passed away, and usage dropped, the GAR Hall was deeded to the city.  In time the owners abandoned the building, allowing it to stand vacant for three decades.  In 2011, “Mindfield, a small advertising and marketing firm,” purchased and renovated the Richardsonian Romanesque structure.”  The venerable old hall now looks brand new, and hosts two restaurants, office space and, as my brother reminded me, the ghosts and echoes of thousands of aging Civil War veterans, discussing, debating and arguing over the real history of the Civil War.

2 thoughts on “Detroit’s Grand Army of the Republic Hall”